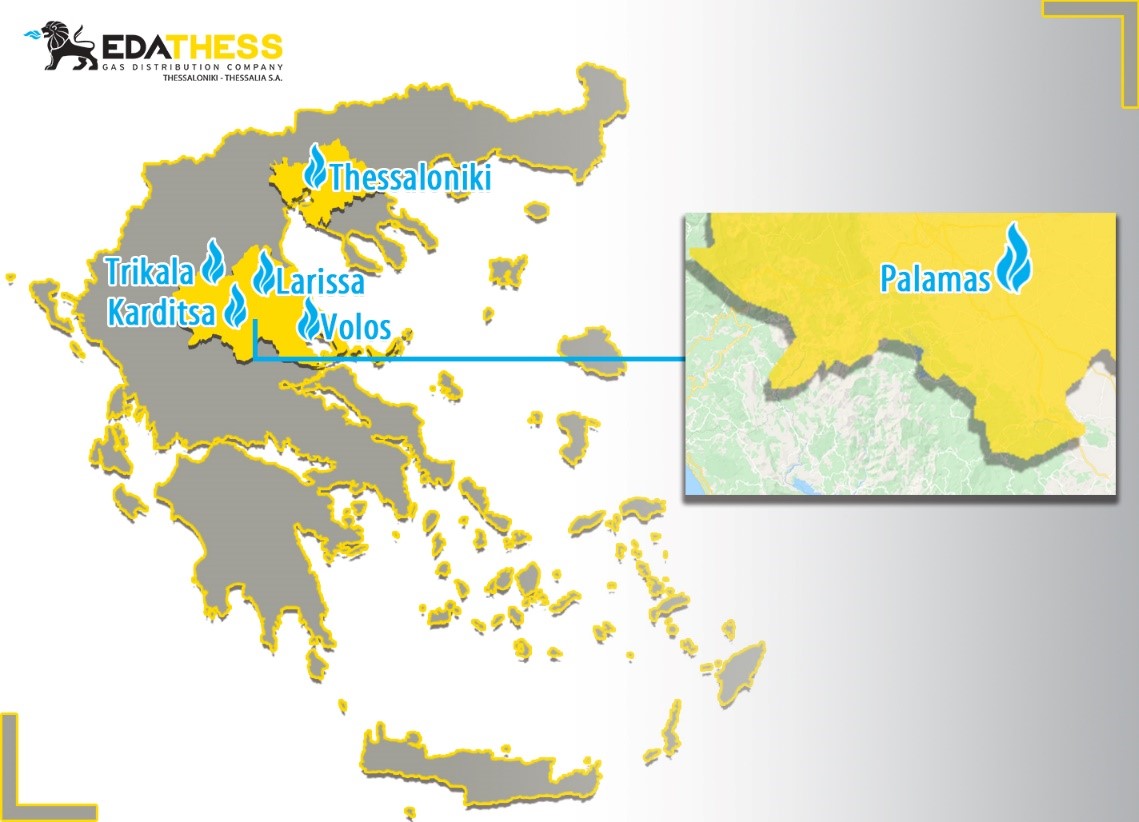 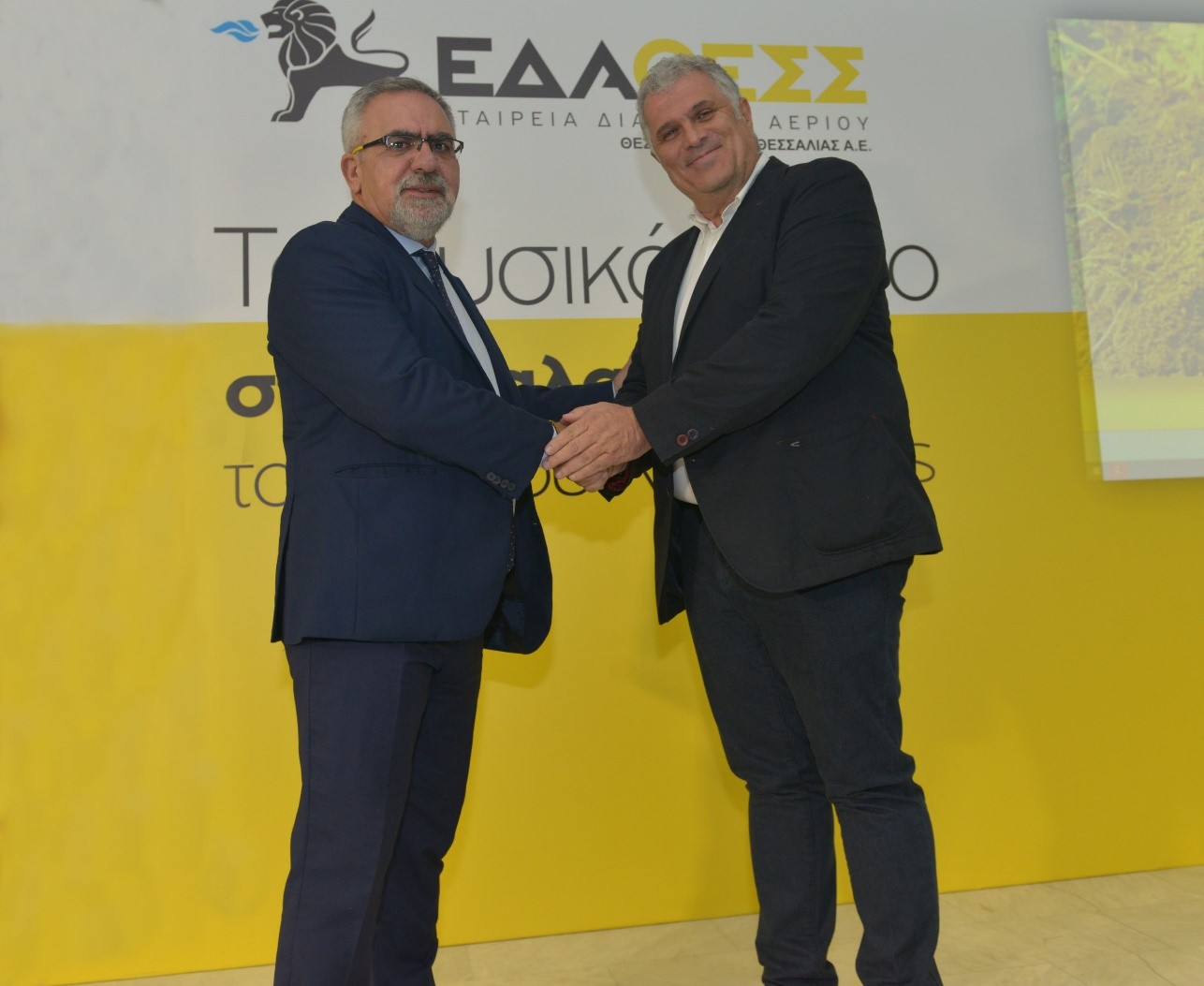 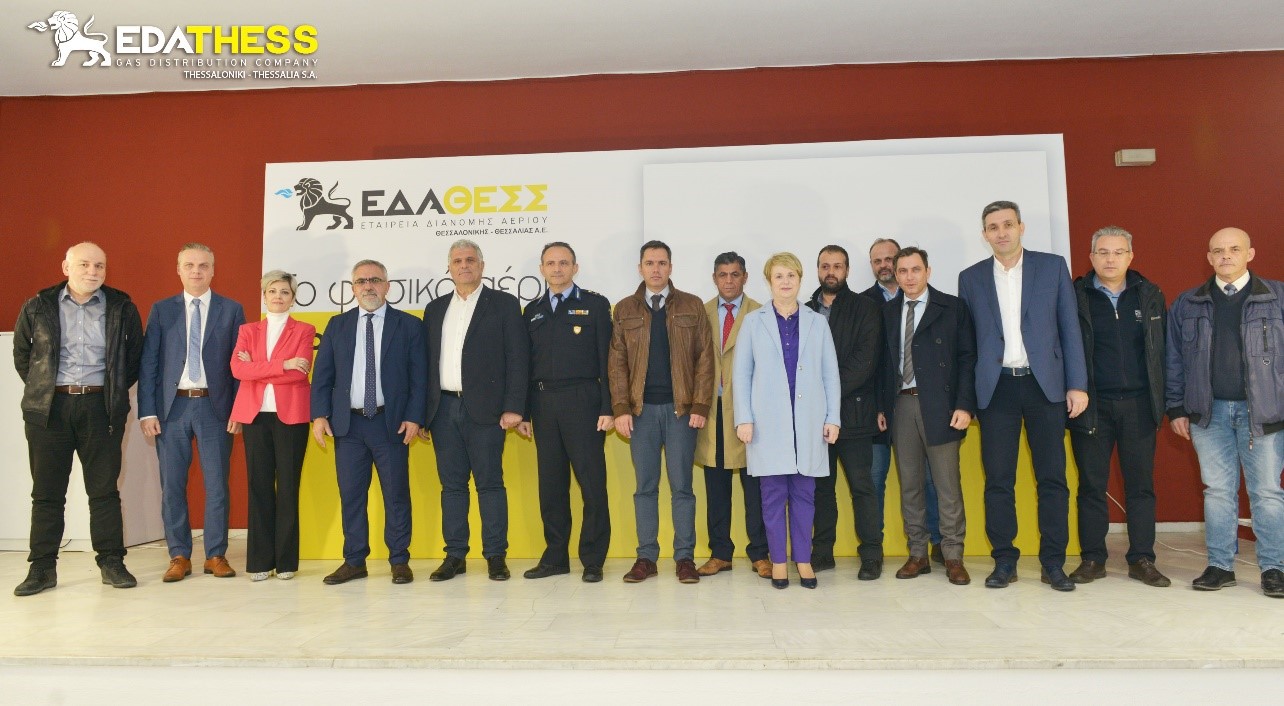 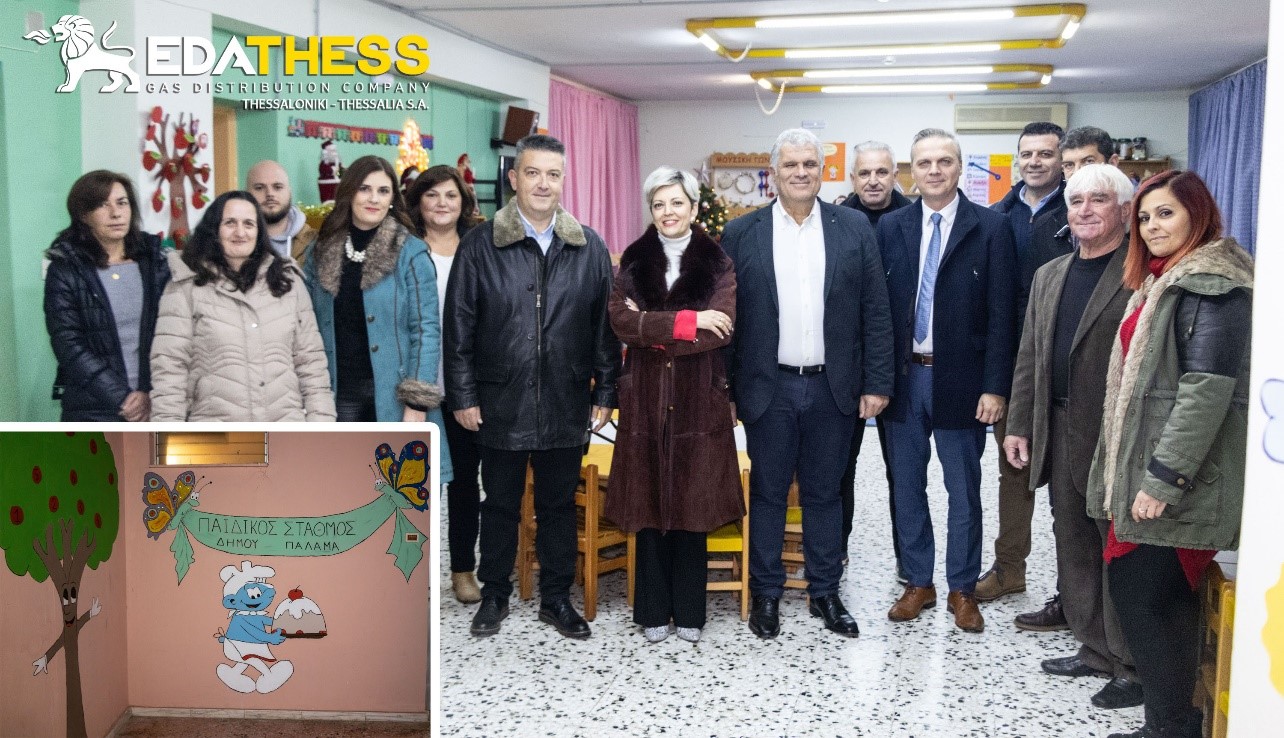 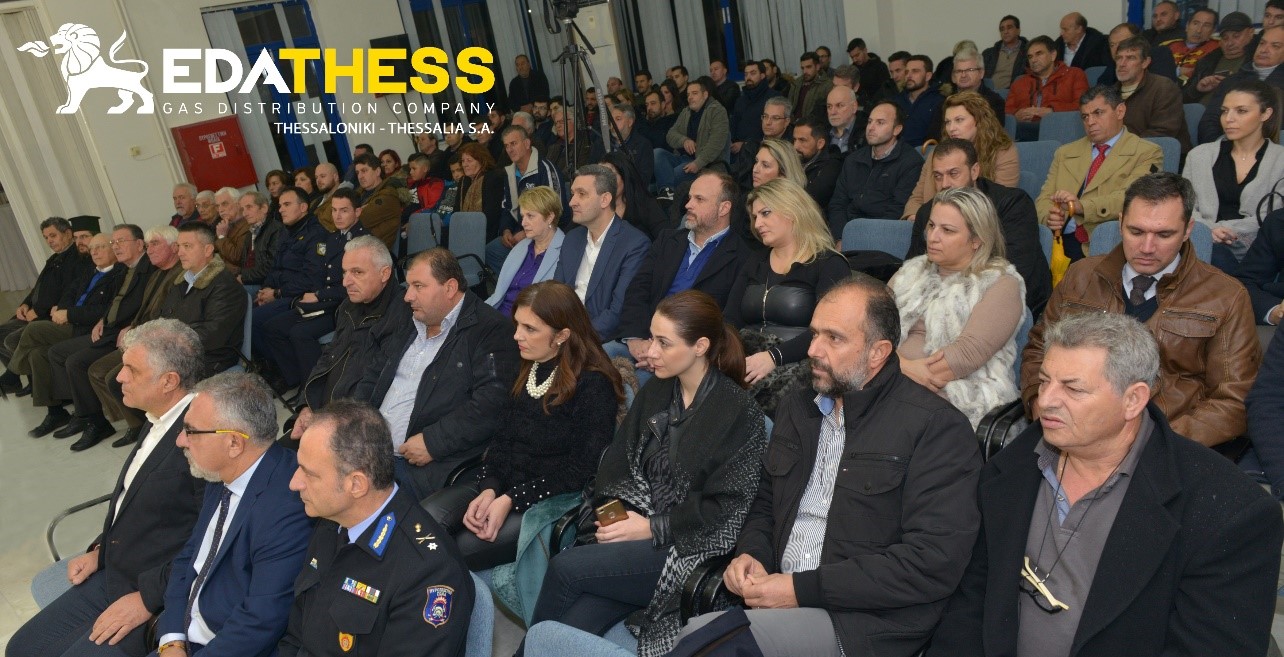 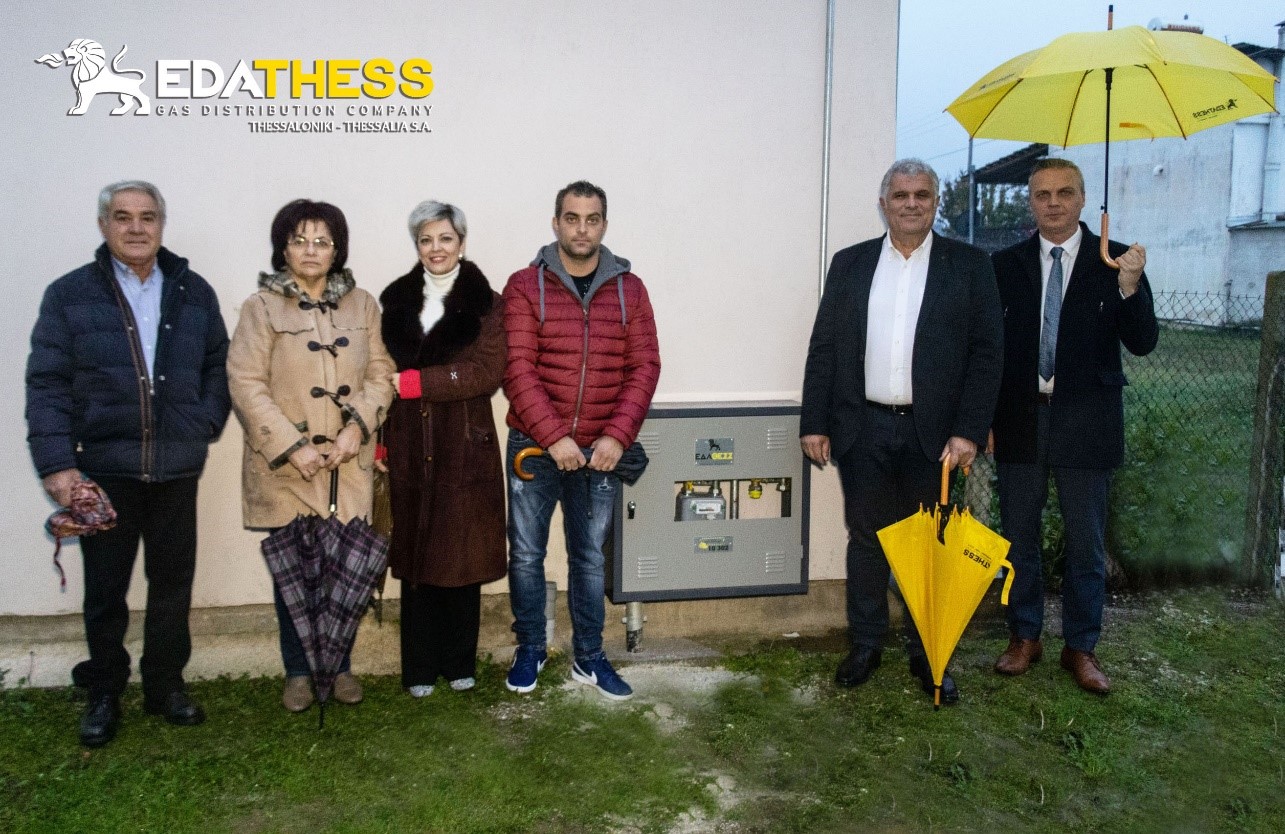 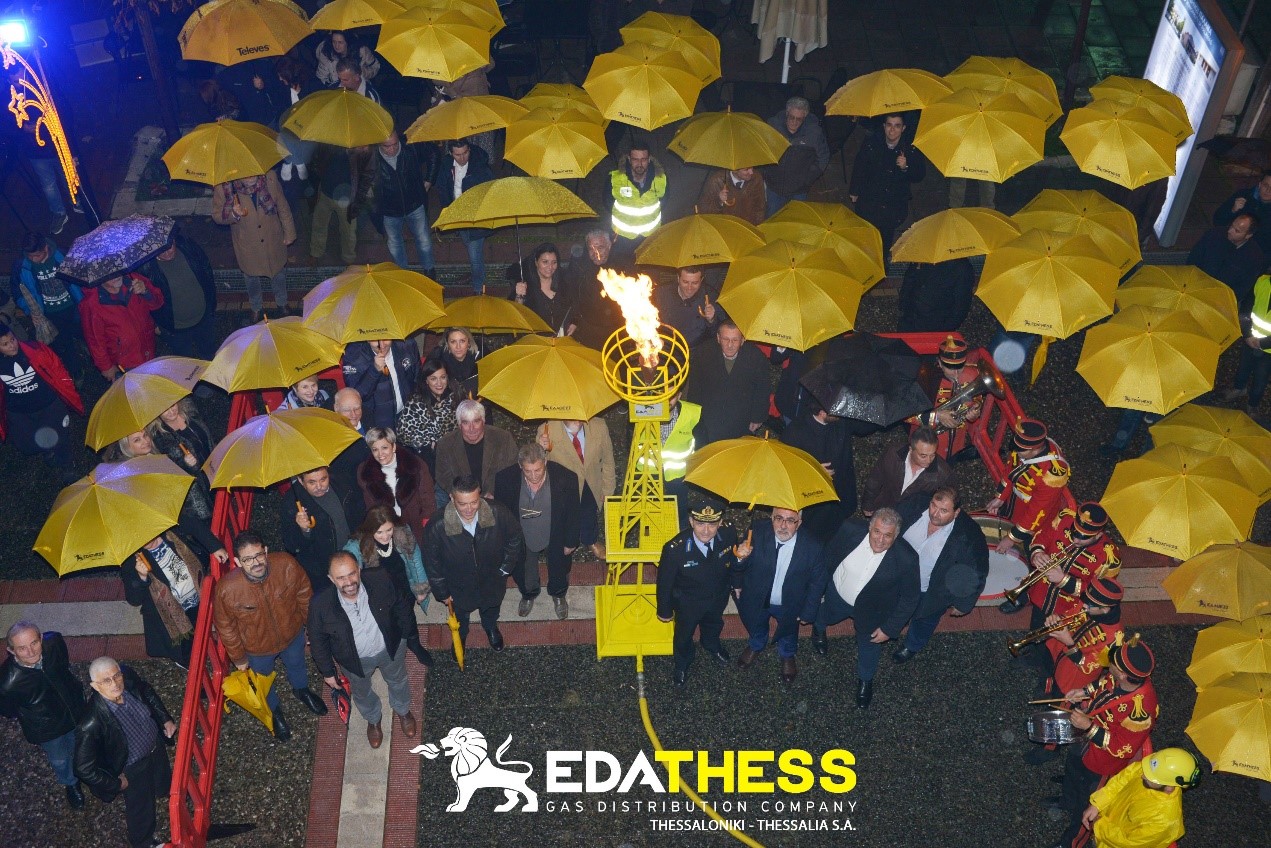 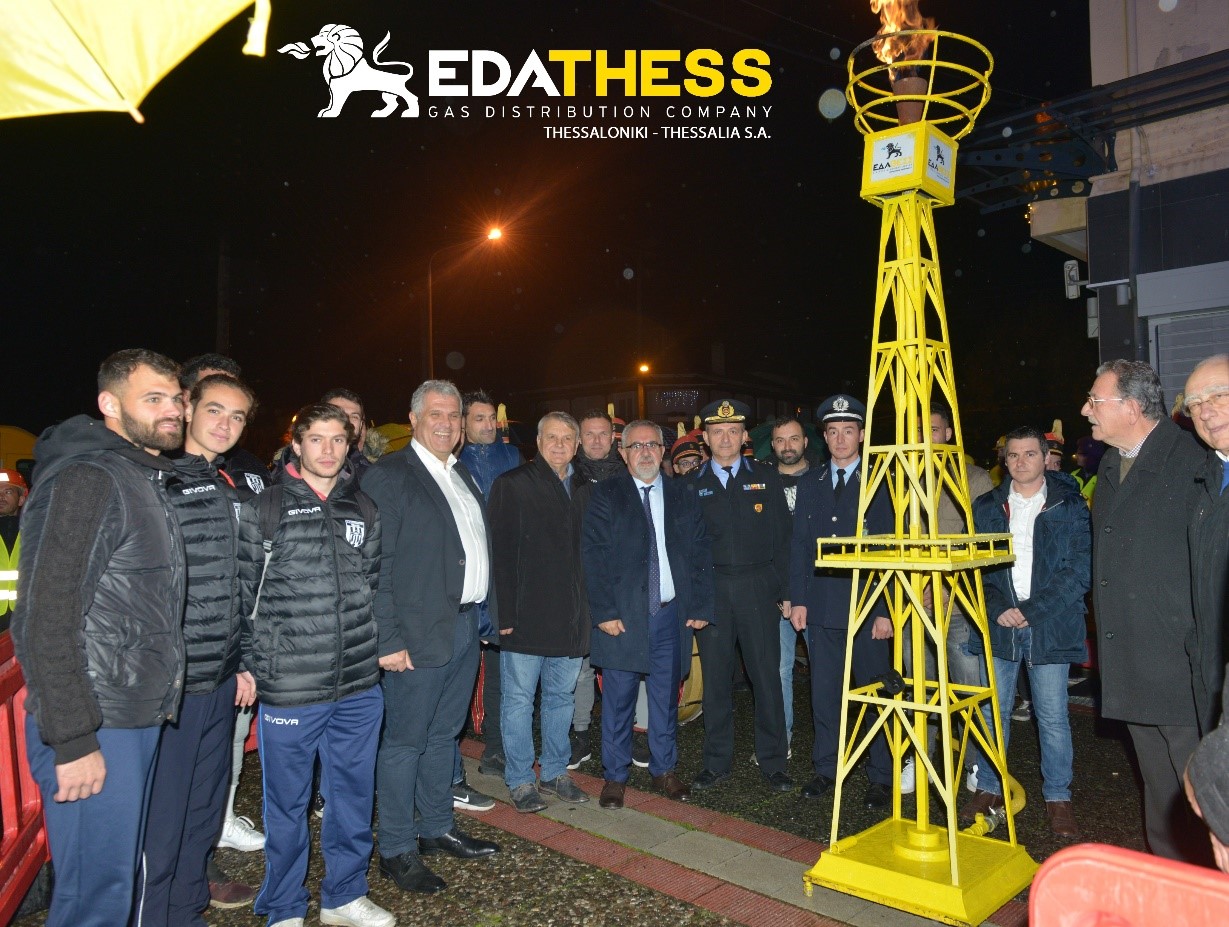 EDA THESS is expanding its network and continues to contribute to the country’s energy map expansion. In consistency with its commitments and the approved Development Program 2019 – 2023, the Company inaugurated the supply of the distribution network of Palamas of Karditsa Prefecture for which an event was held in the presence of local authorities and many citizens.

In his speech, the General Manager stated that the main pillars of EDA THESS strategy are its well – organized operation, the consistency to its planning, the innovative actions, focusing mainly on the distribution network’s safety, elements that consisting of its developing course, acknowledging it as an operation model.

He continued saying that EDA THESS, broadened its energy planning for the further penetration of natural gas. The Company relied on its high expertise and took the initiative to supply remote areas with CNG, creating thus, the right conditions for the exclusion of energy isolation of the remote from network areas.

In Thessaly, 13 areas are already benefiting from the use of natural gas and Sofades of Karditsa Prefecture and Agia of Larissa Prefecture are expected to be supplied in 2019.

The General Manager emphasized that the Company aims to maintain high levels of the network’s safety through the uninterrupted gas distribution and to optimize the services provided to the consumers. Emphasis was placed on the Company’s dynamic route, that enables the implementation of its long-term strategic planning with maximum cost- effectiveness where the geographical dispersion in not an obstacle.

He also pointed out that “the return on investments for the shareholders, the high standards of the provided services with the lowest distribution tariffs in Greece for the benefit of consumers and the professionalism combined with the personnel’s high expertise, characterize the Company’s strategy”. In addition, he stressed that EDA THESS achieves the above in a framework of dividend distribution to DEPA and ENI Shareholders annually without burden the State Budget.

Moreover, during his speech, he mentioned the satisfactory results of the natural gas penetration in Thessaly, since the network serves 65% of the population. The total number of contracts in the region exceeds 107,000 for domestic, commercial and industrial use, with 940 km of 4bar low pressure and 105,5 km of 19 bar medium pressure active network.

The Mayor of Palamas, Mr. Sakellariou thanked the Company for the valuable cooperation and for being consistent to the schedule for the works’ completion. He expressed his satisfaction at the fact that Palamas is one of the first towns connected to gas distribution network. He stressed that Palamas’ residents have been particularly interested in the use of natural gas since the first moment, submitting more than 1,500 connection applications during the pre- registration phase.

During his speech, the Manager of Development of EDA THESS, Mr. Stergiopoulos M., reported that the Company develops its activities as an Operator of the natural gas Distribution Network in the Regional Unit of Thessaloniki and the Region of Thessaly, in accordance with its Licenses, the duration of which is designated until 2043. The Company fully respects the legal and regulatory framework, taking into consideration its Operational Independence for the fulfillment of its obligations. Consumers can freely choose their supplier from the 17 Distributions Users, who operate in Thessaly and from the licensed professionals for the construction of their indoor installation. Additionally, the Company’s main obligations include the ensuring of network’s reliability, the maintenance of a technically sound and efficient network, the compliance to the technical specifications and operating and maintenance planning requirements, thereby achieving highs performance targets of the distribution activity.

The Manager of Network Development and New Connections, Mrs. Kalogirou E. stressed the great interest of citizens, since the connection applications exceeding 1,200 while 125 consumers have signed the connection contract and EDA THESS has proceed with the construction of the delivery point. The first residential consumers and the Municipal Nursery of Palamas have already been supplied. She added that by the end of 2023, the construction of 9 km network is planned for Palamas, an investment on Network and Consumer’s Connection that will exceed 2 million €. She noticed that in the Region of Thessaly, the Company manages more than 103,000 natural gas meters and especially in the Prefecture of Karditsa, gas penetration reaches 60%, although the license for the area received in 2009. Concluding her speech, she said that in the Prefecture of Karditsa, more than 7 million € will be invested according to the approved Development Program of the Company.

The Minister of Justice, Mr. Tsiaras K., welcome the ceremony by his letter, describing the ceremony as “an event that brings multiple benefits to the people of the region who expect high quality services in energy from a reputable company, such as EDA THESS.”